This was one of my goals of countries to visit. I am so glad I got a chance to go and experience it. I originally planned to be here with my cousins (all of our first times visiting here) but unfortunate events came up but I was still able to make it here due to work.

There is no place like Japan. Anime fills the streets, people dress up sometimes on the train. The trains are never late, people form lines and wait to cross the street. There are girl bars everywhere and they still use a ton of coins. Anthony Bourdain has said it too that theres no other country with that many things to do/see/eat per mile than Tokyo.

Shops in Japan are very narrow and stack up vertically (kinda like Dark Souls 1). A typical Ramen shop has these kind of vending machines, you put in your Yen, press a selection and out comes a ticket. You go to the bar and sit down and place the ticket on the bar table. Then in a few minutes you get your ramnen. It's a pretty quick, stream lined system. In Japan, they also get offended if you tip them. I watched a bit of this documentary Ramen Heads and it's pretty accurate to what I experienced everywhere. The chefs are dedicated to the craft and seek to get better everyday (or else whats the point?). That continuous improvement mindset resonates with how I see life.

With that philosophy, you can really walk around anywhere in Japan and be in awe of the food. Ramen is about $10 USD when it's all said and done. It's a great inexpensive meal that can work for any time of the day.

The super notable chain souvenir store in Japan is Don Quijote, theres a ton of them around and they just have awesome gifts. Very good packaged treats here too.

no shortage of hilarious weird things in Japan

The next day I set out for adventure, I wanted to go to Diver City to see the 1:1 Unicorn Gundam. It had been on my "must-see" list since I found out about it's construction and the removal of the 1:1 RX-78-2. This is a true engineering feat. If you know me, you know that I really like Gundam. The mech designs and themes have influenced a ton of media today. Gundam as an anime is OK but I really just like the mechs and models. It is also one of the longest franchises out there.

Ahead on my way

Before going there, near the train station there was a pretty cool department store that I bought a pretty neat shirt from. I explored the other floors and stumbled upon an Evangelion store.

I later ended up snagging the Unit 2 model in Akihibara for about $30. I built it and its a very nice kit. I love how the Please Do Not touch sign is an AT field.

The train to get to Diver City was quite difficult, I had to do about 3 transfers, Google maps was not too correct as train schedules would change based off of construction or I was just an idiot. I managed to meeet a french friend who was actually meeting up with friends in Akihibara. I asked him because he had a chibi Goku keychain and was one of the only non-japanese people on the train. I befriended him and joined his Party to meet up with his friends. I probably would've got lost without him. Later I learned that he had moved to (and married in) Japan here from France. He was very happy to live in Japan.

Diver city (Odaiba) is a man-made island. The Wiki article is pretty cool.

When we got there, the first thing his friend wanted to see (first time in Japan) was the Trick Art Mueseum. I joined him because this was a pretty cool interactive exhibit. Photos are heavily encouraged. We had a very engaging and excited 5min presentation before entering where they encouraged us to explore and find secret passages. Entrance was about $10.

Optical illusion the 2 ninjas are the same height

The slider allowed you to clearly overlap and see that the ninjas were the same exact height.

I was in jaw dropping awe when I first saw it. It was perfectly made with every detail of what the real thing would've looked like. Had warning decals, caution labels for the engineer team that would look over maintenance of this mobile suit.

The Guardian of Odaiba

This thing transforms and even looks better at night

The Gundam at night, 274 days since

The glowing colors on the Pyscho-frame would change every now and then. I did not stick around for the transformation as it was every so-often.

After nerdgasming at the Gundam, we were quite hungry and went to the food court inside the mall. There was a bunch of choices on what to get, I knew that every option was good so I just seeked the one with the best wait time. I went for Okosoba and had no regrets.

After this we split up as they wanted to check out the arcades, which would have been a good time but I knew I was gonna spend all my time checking out The Gundam Base. The Gundam Base is ridiculous, it has every model ranging back from the 80s and the present. There were some nice exclusives that I got badged Gundam Base exclusive.

The Gundam culture in Japan is real as most celebrities know what it is and acknowledges it's influence. It's not surprising that Linkin Park was a huge fan and had a 1/144 GP-01FB made for them.

There was another section where you can see the Gundam World Builders Cup winners and other notable creations. Below is a commissioned set from the Gundam Base

Later I regrouped with the friends and we went to Shibuya. Exiting Odaiba was crowded as the place closes at 9pm and everyone is on the metro. It wasn't so terrible as those youtube videos with people getting shoved in the trains but I was pretty crammed

We went out and chilled out at a Starbucks rooftop terrace. Shibuya was lively as it was a Saturday night and tons of modded out muscle cars and bikes were along the streets.

We finally parted ways and I was grateful I met them. I head on my way back to Ikebukuro and stumble upon a sushi spot. Mainly to charge my phone.. little did I know I stumbled upon one of the most unique things.

This was Niku Sushi Ikebukuro. After they presented this to me to read and disclaim, I was game to try something new

I tried a flamed thin sliced beef that was under some rice with a bit of soy sauce. It was delicious

Awesome food, great experience, relatively inexpensive too. Seriously I wish I could eat more but I was stuffed

The next day I wanted to explore Akihibara. I would describe it as a place where Anime, Video games and electronics are fully embraced.

On my way over, right off of the train, I actually got off a earlier than I should have. Which led me to see some pretty cool shops, dedicated boots/shoes and other nice trades. It must have been destiny because I stumbled upon the Gundam Cafe in Akihibara. This was just outside Akihibara. The line to wait wasn't too long so I definitely queued up.

Once inside, it was quite awesome. They had a few TVs around with every Gundam opening playing. I forget to think about how many artists they had propped up and made famous with their openings. Best openings in my opinion are both the Zeta openings and 0083's The Winner. Honorable mention and strong nostalgia would definitely go to the Gundam Wing's Two Mix openings.

The Red Comet's Spicy Curry with a Hyaku Shiki glass

Needless to say I definitely bought the cup

After an unforgettable lunch, I walk down my way to Akihibara.

There was so much to do here. Merchandise, gundam models, video games and collectibles were here to find and buying them was well priced. I knew most of my Gunpla haul was going to be from here.

Stopped by for some Magikarp cake

Mario Kart in the Akihibara

Stopped by a steak bar in Akihibara, these became one of my favorite things in Tokyo.

The steak was just so fresh and tasty. Supposedly they import all their beef from Australia

The next day I had some Udon and Krokke for breakfast

This was actually from a cafeteria somehwere in Ikebukuro, The size of the Udon was XL and the total of all this was like $12

The trains in Tokyo were really efficient. Everyone's main mode of transportation as Taxi's are crazy expensive. The last train is at midnight and then resumes at 6am. This means that if you are out partying past midnight, you are out there for the long haul

What it looks like on an busier than average train ride

For my last night, I went out again in Shibuya. For dinner, I stumbled upon one of the greatest steak places. Ikinari Steak Shinjuku Nichome 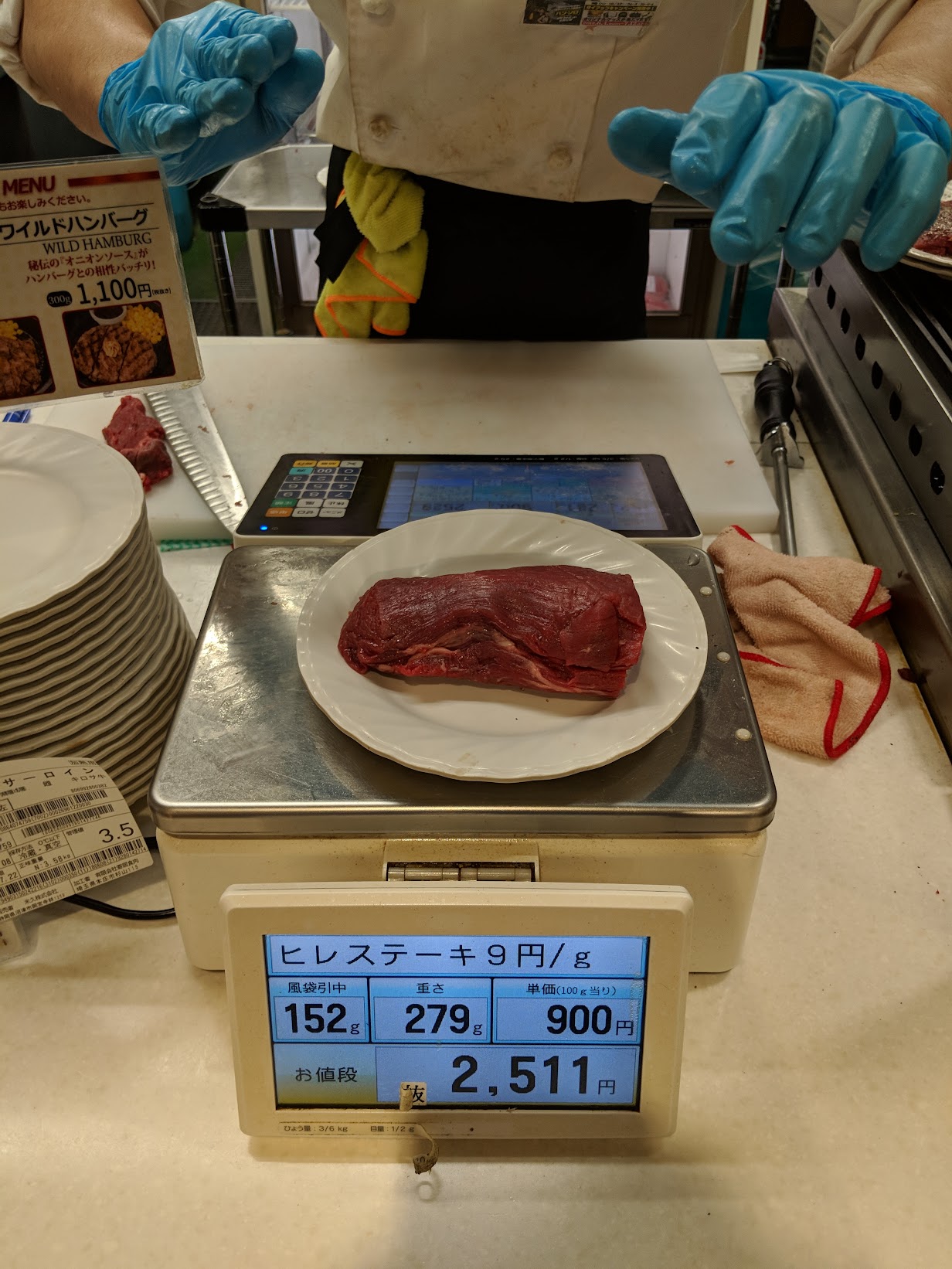 You go in, select your meat, pay by the gram 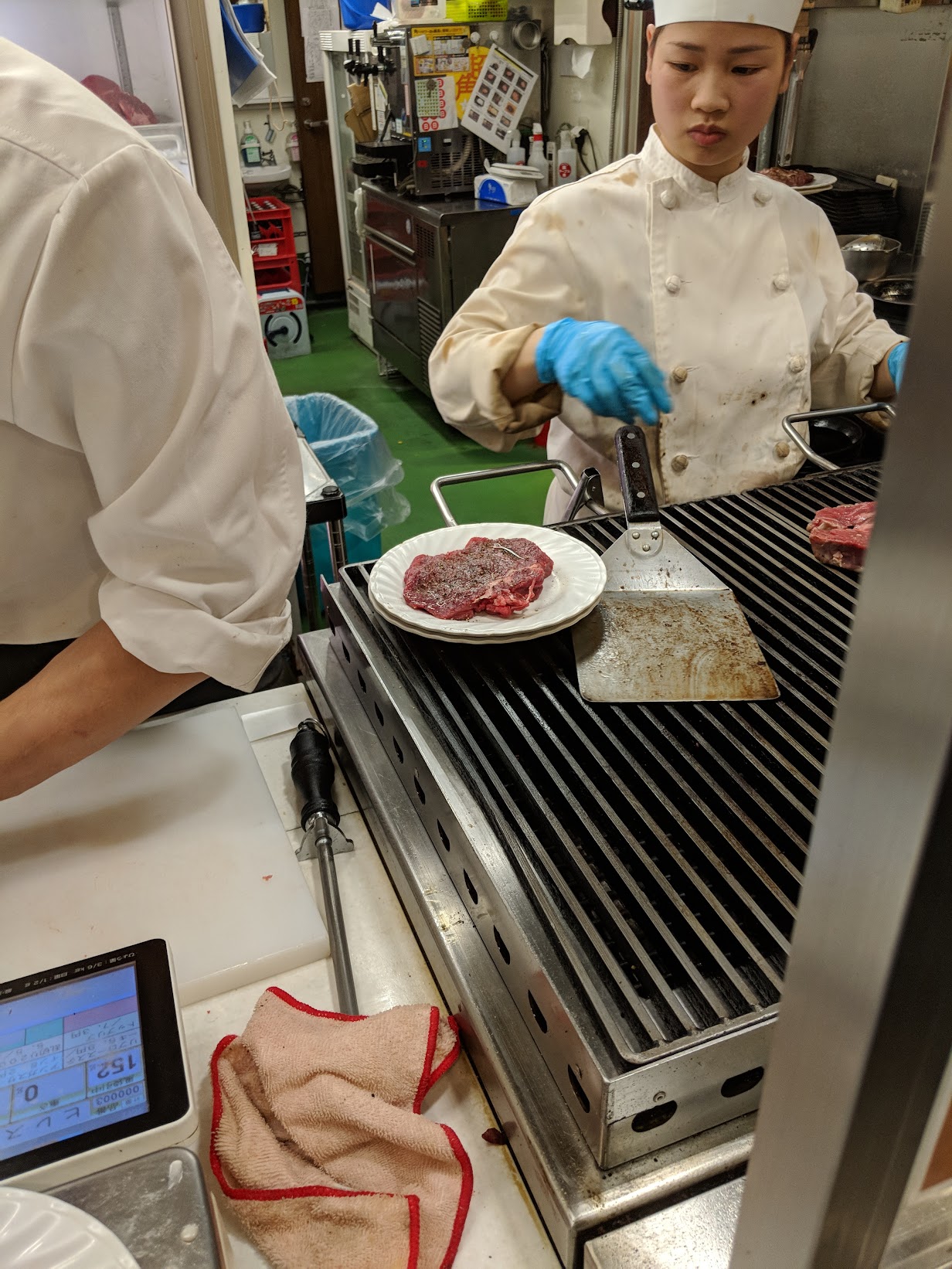 Serve it to you with onions ontop of corn 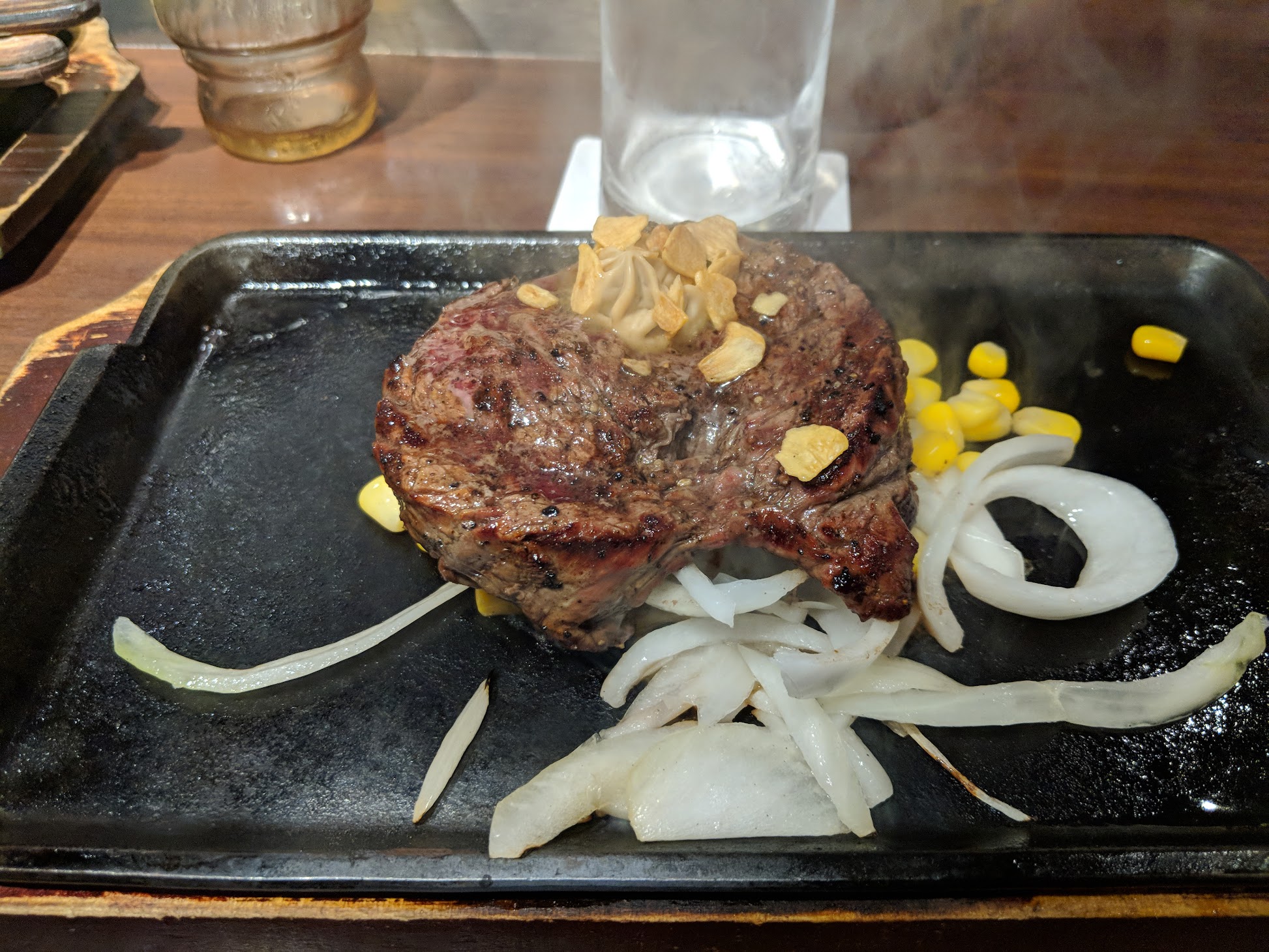 Had to go for a second

Whilst devouring my steaks, Met a fellow traveler from Las Vegas, his friend was sick and bed ridden at the hotel. He needed a wingman

It was a sunday night so it wasn't the best night to go out (notable places were not open) but we managed to find something. Went for the long haul and didn't get back until the morning trains at 5am

I ended up having to buy a suit case for all the stuff I bought. This was actually apart of the plan.

I definitely gained some weight here. I had to furiously bike it off when I got back home but it was well worth it. I would definitely be back to explore more of Tokyo.

I cheaped out on this stay as I only needed a place to sleep, shower and release my bodily fluids and solids. I am pretty sure this was a love hotel but it had a huge shower room and the bed was not so bad. This was not a far walk from the train and there were some cool stores that were nearby (Evangelion store, pretty cool mall for clothing too). It's about 15min from Akihibara and pretty close to Shibuya. Hotel Aurora in Ikebukuro Tokyo, Japan.